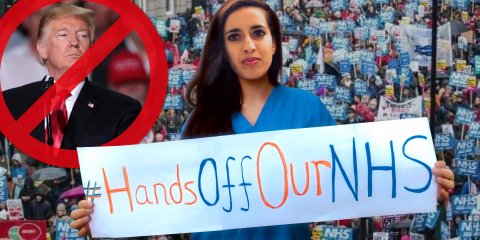 THIS EVENT HAS BEEN CANCELLED - Sorry for any inconvenience. The debate on this amendment has been pushed back, and we're not sure now if it will be debated at all, so we've decided along with Keep Our NHS Public, to cancel the demo. Keep an eye out for updates via email!

On Monday, parliament will debate an amendment to the Queen’s speech which seeks to protect our NHS from trade deals by ending privatisation. The amendment has been tabled by Shadow Health Secretary Jonathon Ashworth and is moved by Jeremy Corbyn, Barry Gardiner, Emily Thornberry, Rebecca Long-Bailey and Nicholas Brown.

We Own It and Keep Our NHS public are supporting this amendment and have called a protest outside Parliament on Monday 21st October to coincide with the debate on the Queen’s Speech. We're demanding a publicly administered NHS and an end to privatisation of the service.

Join us! Meet in Old Palace Yard just outside the Houses of Parliament at 1:45 on Monday - Jonathan Ashworth MP will be joining us from 2, and Philippa Whitford MP at 2:30. RSVP on Facebook or just turn up!

The amendment is as follows:

This House respectfully regrets that the Gracious Speech does not repeal the Health and Social Care Act 2012 to restore a publicly provided and administered National Health Service and protect it from future trade agreements that would allow private companies competing for services who put profit before public health and that could restrict policy decisions taken in the public interest.

This amendment is a clear commitment to protecting the NHS from further privatisation and exposure to future trade deals after Brexit. It also calls for the repeal of the widely condemned Health and Social Care Act and the restoration of a publicly run and provided NHS. This has major implications for the future of the health service and will draw a clear dividing line between those MPs who support NHS privatisation and those who don’t.

Can't make the protest on Monday? You can still help! E-mail your MP calling on them to pledge to protect the NHS from trade deals by ending privatisation.

You can also share this page to spread the word.

I Like many other Senior Citizen on Pension Credits need to access the NHS from cradle to grave. Especially when one becomes very unwell. I value my Dignity as much as I do THE NHS!