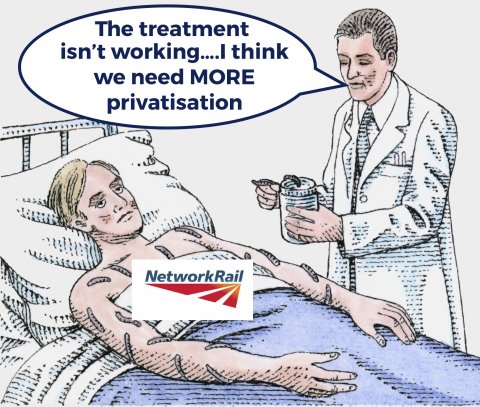 This letter to the editor appears in Rail Pro magazine (page 16).

The call by the Institute of Economic Affairs (IEA) for ‘full-blooded privatisation’ is not only ideological and misguided, it is dangerous.

Rail infrastructure has been privatised before. Under Railtrack, our railways were asset stripped to maximise shareholder value. The result was that people died in the crashes of Hatfield and Potters Bar.

Passengers don’t want new standing-only carriages and line closures as the IEA prescribes, and they don’t want deaths on the railway. We don’t know who the IEA is working for - it has been found to be ‘highly opaque’ and untransparent in terms of its funding. It is definitely not working for passengers.

There is no mandate for privatising Network Rail. Nearly 60% of the public want a publicly owned Network Rail; less than one in four support its privatisation. Amongst Conservative voters, a majority still supports public ownership.

We are paying more than we should for our railways because of privatisation. Private railways won’t ‘end wasteful investment’ as the IEA would like to think – they are wasteful investment. Research shows that £1.2 billion a year could be saved under public ownership – and this move would have strong public support.

Privatisation and fragmentation have been a disaster. We don’t need any more of them. The IEA is like a medieval doctor, using outdated methods, calling for our railways to be bled dry.

Passengers will suffer if this goes ahead - we need to stop Network Rail privatisation in its tracks.

Its about time we stand up and demand our voice is heard, we vote these people in to represent us. not fatten their own wallets.

The privatized Rail Operating companies and fragmented system is not working and never will. The Tax payer is paying more and more each year to pay the shareholders dividends and not improving services. This outrage has to stop. The entire Rail Network and operating organisations needs to be Nationalized again. It didn't work in the 1930's and it doesn't work now. The Rail Subsidy is only going to Fat Cat Shareholders who do nothing for the Passengers! Same with Road Transport - Buses and coaches. We need a fully integrated State Owned Public Transport Industry including TfL buses, tubes and trams and DLR

A lot of people go to the recognition they are disappointed with how they seem. For many, a solution to this problem is cosmetic surgery. When done correctly, surgical treatment can certainly make anyone look the way that they want. When completed improper, patients can be left with lower than stellar results as you would expect. These post consists of suggestions, which will help anybody receive the surgical treatment effects they demand.

Pupils to get extra £2.2 billion to rebuild further education colleges