What Chris Grayling doesn't want you to know about the East Coast line: 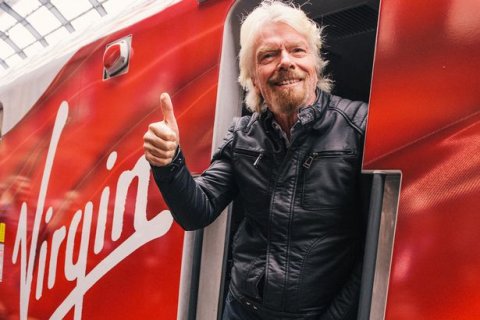 We’ve been emailing MPs for a few weeks now about the bailout of Virgin Trains East Coast (VTEC). Thanks so much for all the time and energy you have put into contacting your MPs and forwarding their responses! We say this all the time, but we really couldn’t do this without you.
We’ve seen quite a few responses from Conservative MPs, which all look suspiciously similar, so we decided to pull out some of their arguments and respond.

Is it a bailout?

They say that this is not a bailout because Stagecoach and Virgin will not receive any money from the government, and because VTEC have lost £200m while running the franchise. We say that allowing VTEC to get away without paying the premium payments they promised - the size of which were based on their own predictions of their profit when they bid for the franchise - is a de facto bailout.
Letting VTEC get away with overbidding, failing, and then not paying their premiums, means that other train operating companies will be encouraged to do exactly the same. This could mean that the public purse loses tens of billions over the next few years through similar overconfident and failed rail franchises.

What has privatisation ever done for us?

They say that privatisation has been good for our railways, citing increased passenger numbers and investment. We say that there are plenty of explanations for an increase in passenger numbers. Cars are becoming less popular, and more people need to commute to work in cities than in the 90s.
Most importantly, the government invests far more each year in the railways than private companies do - again, the public purse takes the hit, and private companies reap the profit. The new Azuma trains that Richard Branson boasts about are part of a £5.7bn government funded project to improve intercity travel in the UK - they are not Virgin's responsibility.

They say that they Grayling will choose the option that is ‘best for taxpayers and passengers’. That’s great - we want that too! Public ownership is the best option for taxpayers and passengers because it would save us money - £1.2bn per year - which could fund an 18% cut in fares. Public ownership also means less fragmentation - and more coordination, which means fewer and shorter delays on the line, consistent standards across the network, and more services in less ‘profitable’ areas who desperately need more trains.
We need to make sure that Chris Grayling makes the right decision on the East Coast franchise. If you’ve written to your MP already and received a negative response, would you consider sharing the action with your friends and family who may live in different constituencies?
Share the action here.

The Tories would rather pour billions into privatisation. Public ownership of the railways however desirable would mean all other public services, water, gas, etc would eventually fall back into public ownership. They are so convinced that capitalism is the only way, they cannot let it happen.

Recent polls have shown that not only will bringing the railway into public ownership improve services and save money, as it did on the East Coast mainline; it is a policy that is very popular with the electorate.

It's time all the railways were brought back into public ownership. Privatisation has brought nothing to the traveller, only to its shareholders.

Take back control of our public transport

Every problem with the old nationalised railway system was msgnified by MPs and the media in order to soften up the electorate who will then believe the way to solve the problem is to hand it over to the private sector. What has happened is that the so called private sector is subsidised to a greater extent than the old BR ever was.

In the mid-90s, Prime Minister John Major actually justified privatisation on the basis that by the year 2000 rail subsidies would be completely eliminated and replace by premium payments to the Treasury.

No, I didn't believe him either.

Richard, BR did exceptionally well to deliver as many bums on seats as it did for the level of subsidy provided, but suffered genuine problems from the constant parsimony. Our local trains were trailed as 3-car sets but were delivered as 2-car as the DoT was convinced rail use would decline; the Cambrian Coast line suffered for years with weight and speed limits owing to lack of investment; the electrification of the East Coast was done too cheaply as it had to be funded from Intercity's profits, with consequent reliability issues. In these ways and many more, being nationalised is no perfect answer, you end up competing for every pound of investment with everything from sick babies to aircraft carriers.

- Train frequencies: Still the same as under BR (with the exception of some extra trains on Sundays, which was a result of the opening of the Meadowhall shopping centre in the early 90's, not privatisation).

- Journey times: Still the same, or slightly longer (so as to avoid delay penalties).

- The trains themselves: Still the same old Pacers introduced 35 years ago by BR. (And still under promise of 'replacement', as they have been through at least the last two franchise changes.)

So, on the Penistone Line the essentials have not changed one whit under privatisation - with just one exception: the fares, which have TRIPLED since their BR levels. How much more-heavily-used still would the line be if THEY had stayed the same, like everything else?

In other words, if you think that a garish new paint job for old trains and new uniforms for the same staff every time the franchise changes is a benefit of privatisation, and that that alone is enough to overcome the resistance caused by massive and continuous fare increases and miraculously account for the steady and substantial rise in passenger miles on the line, well - the tooth fairy will be along soon, right behind the new trains.

Bring back all of our transport ,privatisation has not worked for the traveling public,only the greedy few

Our railways and buses should be renationalised now.

I have never understood why any government would suggest that putting public services into the private sector would be good for the country, one only has to look at the vast profits that are generated by the likes of Arriva-Stagecoach-Go-Ahead e.c.t. all derived from supplying public transport in many regions throughout the country.

These profits could help to support the public purse if they were in public ownership by allowing these national assets to be run by private companies who generate massive dividends for those who are fortunate enough to be able to afford to invest in them by way of dividends we are giving away valuable money that could be used to make this country a better place and for that reason I say take back what belongs to us.

I have never understood why any government would suggest that putting public services into the private sector would be good for the country, one only has to look at the vast profits that are generated by the likes of Arriva-Stagecoach-Go-Ahead e.c.t. all derived from supplying public transport in many regions throughout the country.

These profits could help to support the public purse if they were in public ownership by allowing these national assets to be run by private companies who generate massive dividends for those who are fortunate enough to be able to afford to invest in them by way of dividends we are giving away valuable money that could be used to make this country a better place and for that reason I say take back what belongs to us.

I remember when the trains were owned by the Nation not a perfect service but MUCH better than we get right now.

Keep badgering your MPs about public ownership of our railways, people. They care much more about your vote than VTEC & the like!

Rail services in Germany, France and Holland are all run by state-owned operators. The same state-owned operators run most of Britain's rail services, including Northern Rail, which is owned by Arriva, which is itself owned by Deutsche-Bahn, Germany's state-owned rail operator. Profits (including subsidies paid for by UK taxpayers) go back to Germany, France and Holland where they are used to keep fares down in those countries, and to maintain efficient services there.

The only state not allowed to operate publicly-owned rail services in the UK is - the UK. This madness has to be stopped.

Facts speak louder than words spoken as political dogma..public ownership is the only way forward for the railways.

Back in 1800 and frozen to death, a certain Mr. Stephenson opened a railway from Stockton to Darlington. He farmed out track maintenance to several contractors and allowed "free access" to the rails. He soon found out that the contractors were skimping on the jobs (to increase profits) and so he took it all back "in house" to make sure it was done properly, directly supervised by the Company. He then found that giving "free access" allowed a lot of slow and unreliable trains on to the railway, holding up his own trains, to the detriment of his own passengers. (Can you see where this is going?) He therefore stopped all free access and only ran his own trains, reliably and to time.

If fragmentation is so good, why did Mr. Stephenson abandon it after such a short time?

IMHO, you can only run a railway "vertically", ie, Everything, track, signalling, operations, buildings all come under one company. I'm not saying you ONLY have one Company but however you slice th railway cake, the operators must have responsibility for its entire operation. The "Big Four" was a good example of this - and it worked.

Rail services in Europe are all run by state-owned operators. The same state-owned operators run most of Britain's rail services, including Northern Rail, which is owned by Arriva, and if memory serves me right had a crack at the franchise once before and messed it up. I really love this rewarding failure which abounds today! Profits (including subsidies paid for by UK taxpayers) go back to Germany, France and Holland where they are used to keep fares down in those countries, and to maintain efficient services there. Virgin have boasted about "their new Azumas" arriving to give passengers modern transport - funny that the actual trains are purchased by HM Government ( sorry I really meant you and me!)