What do those leaked documents actually say about our NHS? 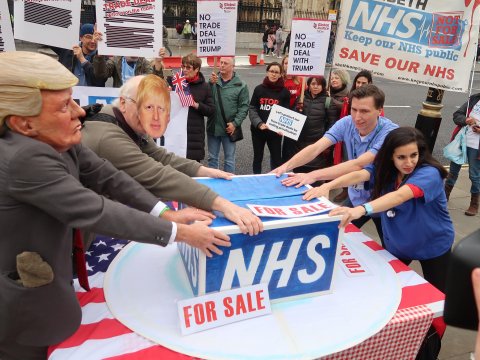 If you're confused or uncertain about what the 451 pages of leaked US-UK trade documents mean, and whether it actually shows that our NHS is 'on the table', this summary from the Keep Our NHS Public sub-group on trade deals, with the help of a briefing from Global Justice Now* should help.

Whose papers have been leaked?

The papers report on a series of meetings held by the UK-US Trade and Investment Working Group (TIWG).  These talks, essentially scoping exercises, appear to represent the first stage of ‘conversations’ about a deal. They took place between July 2017 and November 2018.

Participants included staff from the UK’s Department for International Trade, the British Embassy in Washington, and the United States Trade Representative (USTR) (the body responsible for developing international trade and overseeing trade negotiations).

What progress has been made?

The talks are described as well advanced in some areas (such as services, intellectual property and agriculture). In some sectors, such as pharmaceuticals, they have reached a point that might usually be expected after one year of formal negations.

What do the leaked papers show?

1. The United States expects a trade deal very much on its own terms.

2. The US wants a ‘total market access’ approach, which puts the NHS and other public services at risk

The US wants a form of negative listing, making total access to UK markets the baseline for trade negotiations. The UK appears open to this approach.

As the NHS has already been turned into a market, NHS services are vulnerable to being included in the deal, unless they are clearly and comprehensively excluded. In previous EU trade negotiations using a negative list approach, the UK government chose not to adopt this option. In the US-UK discussions, there is no evidence so far that the UK wants to ring-fence the NHS and keep it out of trade discussions.

The US wants to lock in both existing market access plus any future opening up of markets, so that access cannot be reversed. This would prevent the re-nationalisation of the NHS.

Documents from meetings in March/April 2018 show that the US side has been asking about the NHS in talks specifically focusing on ‘state owned enterprises’. In comments for the eyes of the UK side only, there is reference to a query by the US team about health insurance. This query was seen by the UK side as ‘likely a fishing expedition to check the tone of our response”, but it was also noted that the UK team will in future need to go into more detail about the functioning of the NHS and, for example, whether it is engaged in commercial activities (p.53).

3. Medicine prices for the NHS are already ‘on the table’

The reports show that discussions on medicine prices are relatively advanced. There have also been meetings with lobbyists for the pharmaceutical industry. Preliminary negotiations have reached a point at which the two sides are now ready to begin agreeing the text for the final deal.

Proposals include the strengthening of intellectual property over new drugs and extending monopoly protection for big pharmaceutical companies (particularly for new ‘biologic’ medicines used to treat cancers and autoimmune diseases). This could mean massive increases in the cost of medicines for the NHS, delays in patients’ access to cheaper alternatives, and bigger profits for drug companies.

4. The papers point to the inclusion of Investor-State Dispute Settlement (ISDS)

ISDS is an investment protection measure that allows foreign corporations to sue governments in corporate courts, rather than through a state’s legal system. The US wants to include a form of ISDS in a US/UK trade deal that is particularly pro-business and has a high success rate for claimants.

ISDS would allow US corporations to sue the UK government on a wide range of issues if they consider government actions have reduced company profits (or the profits companies had anticipated receiving). The compensation awarded by these ad hoc tribunals can be massive and even the threat of such a case can cast a chill on policy making, including on policies aimed at improving the public’s health.

5. Reduction in standards and regulations

The US wants the UK to adopt US standards and regulations to enable US corporations to move easily into the UK market: this requires the UK to break with the EU’s (higher) standards.

In addition, the US wants the UK to stop using the ‘precautionary approach’ (where products need to be proved safe before released on the market) and to adopt the US system (where products are assumed to be safe until proved otherwise).

The US has a preference for voluntary standards, created by corporations rather than government regulation.  In the US this has allowed practices such as industrial–scale farming where conditions are atrocious and animals are pumped with steroids, other hormones and antibiotics. The US is against warning labels on tobacco and alcohol and wants less nutritional labelling on food.

A shift to less rigorous assessments of safety, voluntary regulation, and a lack of public information are bound to have an impact on the public’s health.

6. The US has banned any mention of climate change in a US-UK trade deal.

The UK inquired about including reference to climate change in a future agreement but was told that Congress has banned the USTR from mentioning greenhouse gas emissions. This is despite the way trade deals can increase trade in dirty fossil fuels or block climate action.

What does this mean for the NHS?

* “Leaked papers from the US-UK trade talks: A guide to the revelations.” Global Justice Now, November 2019