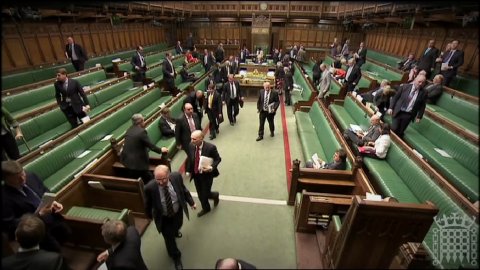 On the 21st of July, the House of Commons voted down a scrutiny amendment to the Trade Bill tabled by the Conservative Member of Parliament for Huntingdon, Jonathan Djanogly. There is simply no justification for not voting for such a simple amendment that goes to the core of why we send MPs to parliament.

In advance of the Trade Bill being voted on in the House of Lords on the 7th of December, and then going back to the House of Commons soon after, We Own It is asking MPs to take our Scrutiny Pledge. The pledge is as follows:

“When the Trade Bill returns to the House of Commons, I PLEDGE to vote for the amendment that gives Members of Parliament the powers to scrutinise trade deals negotiated by the government before they are finalised and signed.”

Despite some Conservative MPs working extra hard to muddy the water on the necessity of this amendment, experts have shown that Parliament currently has little to no powers to scrutinise trade deals. The powers - to the extent that we can call them that - provided to Parliament by the Constitutional Reform and Governance Act 2010 (CRaG Act) are not meaningful. The government currently can initiate, negotiate, finalise and sign a trade agreement without input from or consultation with Parliament. Parliament only has powers to prevent the ratification of a trade deal for 21 days, or multiple series of 21 days, after which the deal is considered ratified.

Jonathan Djanogly rightly argues in a Conservative Home column, there is a “need for the [Trade] Bill to provide a statutory framework that requires the government to take early-stage consultation and ongoing soundings through the course of FTA negotiations. This is in order that business and citizens feel they are being listened to with similar rights to their counterparts in the country with whom we are negotiating. Then, before signing, MPs should get to vote on the deal, as will be the case with the counter-party.” For Parliament’s powers to be meaningful, therefore, our representatives MUST be able to scrutinise and make input to trade deals BEFORE they are finalised and signed.

Trade deals affect almost every area of our lives, from jobs and the environment to food standards and data protection. Most importantly, they can potentially affect our most precious asset, the National Health Service, both in the immediate term and in the long term. The government has opposed an amendment that would explicitly exclude our NHS from trade deals, and Almost all Conservative MPs went along with that because the government promised that the NHS is “off the table” in trade deals. This is despite 75% of the public wanting to see explicit protections for the NHS in the Trade Bill. Yet those same Conservative MPs also voted against having the powers to scrutinise trade deals; powers that would allow them to check whether the government has actually kept the promise to keep the NHS off the table before a trade deal is actually signed.

We send MPs to Parliament so that they could be our voice and look out for our interests. Yet, Conservative voted against having the power to perform the job we sent them to Parliament to do. We don’t elect Prime Ministers directly in Britain. But we elect MPs directly. We have local MPs precisely so that they would look out for the interests of the people in our constituencies, not so they could abdicate that job to people we didn’t vote for in our constituency. The principles of democratic transparency and accountability are at stake on this issue. As Jonathan Djanogly correctly points out, “current UK practice on scrutinising trade deals is neither democratic nor practically fit for purpose”.

Moreover, page 5 of your 2019 Conservative Party election manifesto promised that Brexit will provide Britain with an opportunity to finally “take back control of our laws” and give the British parliament power to decide what happens in Britain. Yet Conservative MPs voted against being able to scrutinise trade deals that our country goes into post-Brexit. How is that not a promise broken?

They have an opportunity to redeem themselves when the Trade Bill returns to the Commons soon. But we all need to ask them to do the right thing this time by emailing them and asking them to sign the Scrutiny Pledge.