Jeremy Hunt, here's how to call off the junior doctors' strike and save the NHS in five easy steps 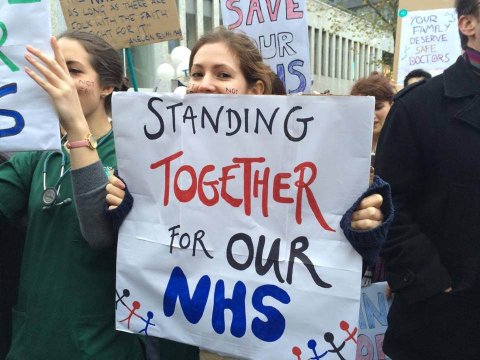 Youssef El Gingihy is a GP and author. This blog was first published in the Independent.

Junior doctors are preparing to go on a second strike this week over the government’s threat to impose a new contract upon them. This is one of many planks in the dismantling and privatisation of the NHS. So now appears to be a good time to outline a plan to save our NHS. As a doctor, here’s how I would go about it. Jeremy Hunt, take note.

The government should tear up the new contract, which demonstrates that it does not value the talents and efforts of junior doctors. Plans to scrap workplace safeguards which prevent doctors from working excessive hours will compromise patient safety.

These are only the highlights. Once you get to the small print, the ramifications are shocking. Non-resident on call doctors could get paid less than the minimum wage for their time. So much for the notion of greedy doctors. The more one scrutinises the contract the more it appears to be a calculated exercise to break the allegiance of staff to the health service. If that’s the case, it is having the desired effect - with nearly half of foundation doctors opting not to continue their training in the NHS.

Dissatisfaction within the NHS is about much more than a single contract. The bigger picture is a government hell bent on the privatisation of the health service. In other words, this is everyone’s fight, and the public has certainly shown overwhelming support for junior doctors despite efforts to smear them.

The Health & Social Care Act is legislation to allow the privatisation of the NHS. It abolishes the government’s responsibility for the health service. It effectively means that there is no legal mandate to provide comprehensive services beyond emergency care, and thus enables unlimited rationing of services provided and the outsourcing of those services to profit-making companies. In 2014, out of £9.63 billion NHS deals signed, £3.54bn (nearly 40 per cent) went to private firms. The consequence of this is that private companies cherry-pick contracts, leaving the NHS with an even smaller pot of money with which to attempt to provide a comprehensive service.

Remember when we were told that GPs would be in charge of Clinical Commissioning Groups (CCGs) and therefore take full responsibility for organising your care? Well, here is how the ‘promised land’ looks: those same CCGs are being privatised through the creation of Commissioning Support Units, spun off to bidders such as UnitedHealth. Personal health budgets are being rolled out to up to 5 million patients by 2018 and are a Trojan horse for top-up or co-payments – and private health insurance.

We are also hearing a lot of buzzwords, such as “devolution” and “integrated care”. Devolving control of health and social care spending to the regions means devolving responsibility for cuts, too. Integrating health and social care means that healthcare is likely to go the way of social care: privatisation and means-testing. Many doctors, including me, believe that government advisors are hoping that CCGs can be merged with insurance companies, so that those who can afford it will be forced to pay for their healthcare. That is not what ordinary Britons want.

The scandalous Private Finance Initiative (PFI) is saddling hospitals with enormous debts. The original capital cost of more than 100 PFI hospitals was around £11.5 billion; the repayments on those hospitals will end up costing up to £80 billion. This differential of tens of billions will be siphoned off to banks, financial companies, construction and facilities management firms, instead of being spent on patient care.

We hear a lot about being all in this together and how we cannot afford the NHS. Don’t be fooled - there’s always plenty of money for those at the top. Instead of renegotiating or buying out PFI contracts, Chancellor George Osborne has introduced PFI2, which is likely to be more expensive with even greater returns for investors.

Funding is a fundamental issue, but it can only be tackled once privatisation has been halted for good - otherwise the health budget is merely diverted as profits for private companies masquerading under the NHS logo.

During the election, we heard a lot of talk about £8 billion extra pledged to the NHS. What you didn’t hear about is the flip-side: £22 billion in efficiency savings, or what you and I might call cuts. This is an extension of the £15 billion in efficiency savings over the previous parliament. Combined with freezing the budget, this means that the NHS is undergoing the biggest funding squeeze since its inception and now, unsurprisingly, it is hitting the buffers.

The crisis in the NHS is real, but it is a manufactured crisis due to deliberate policies that have stripped the NHS of funding. We spend significantly less than France, Germany or Holland on our health service, less than the EU average and well below the US. By increasing spending, we would only be matching other advanced economies.

Fortunately, the legislation for much of this already exists. The NHS Reinstatement Bill will be put before parliament for a vote in March. Of course, the Conservatives have no intention of supporting these proposals, despite promises that the NHS is safe in their hands.

It is up to each and every one of us to save our NHS. This is why we need to support the junior doctors because their struggle is our struggle.

Photo used under Creative Commons licensing, thanks to Birmingham Eastside.

Please stop destroying our NHS. Most of us need it even if the people who are selling it off, by the back door, can afford to pay for care. Remember, at some time you or a member of your family may need the NHS and the dedication of the people who care for us when we are ill. Imagine what it will be like for them to find out that we have returned to the terrifying times when we can only receive treatment at a cost that is unaffordable. We pay taxes and I don't know anyone who doesn't want their money spent on the NHS.

Many people are now aware of the Tory plans to completely privatise the NHS yet still they carry on, it is obvious that this dispute with the junior doctors is part of the plan, just like the miners strike was engineered by Thatcher to give her the excuse to weaken the unions and the rights of the workers. The Tory arrogance and lack of care about what we, the public, think about their actions, the rampant privatisation of services and public indicators, the outsourcing of government and local government work to the private PROFIT DRIVEN corporations etc.etc, is quite obvious. The Tories don't care about the people they are SUPPOSED to SERVE, they only care about their own pockets and the corporations that back them.

The Tories should be TRIED for treason against the British public.

My family had always voted labour, and I was too young to understand why. Now being in my thirtys and watching the conservatives just look after their selves and not care about us everyday common people, I hope whom ever voted them in is happy.