Passengers want public ownership - not a flash sale on fares 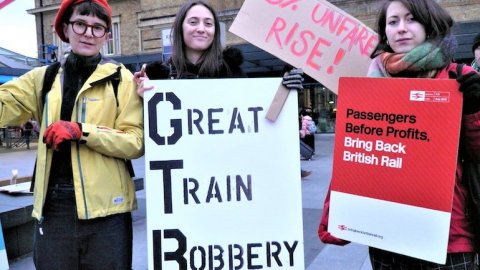 The government's ‘Great British Rail Sale’ offers discounts on rail fares for 1% of journeys for one month only… but while passengers in the UK face the highest rail fares in Europe every day, we don’t need gimmicks. We need real solutions for our railways.

Rail privatisation is ripping us off to line shareholders pockets. So what’s the fix for our broken railways? Bring them into public ownership.

Why are UK rail fares so expensive?

There are three main factors - inadequate government funding, inefficient fragmentation and shareholder profits leaking out of the system.

Privatisation is a key reason why fares are so high. Private companies running our trains causes two major problems:

Alongside a fragmented, privatised railway, lack of government funding is another important reason why fares are so high. The government forces passengers to pay more so it can pay less.

The railway is partly funded by fares and partly by the government. The UK is uniquely obsessed with loading the cost onto passengers, whereas continental European countries understand the benefit of higher public funding. Our government is being short-sighted by cutting funding - as mentioned above, investing in the railway boosts the economy overall. It pays for itself.

How would public ownership help to cut rail fares?

Overall, we waste around £1 billion a year on privatisation. If that money was put towards rail fares, we could cut them by 18%, or we could build 100 miles of new railway track.

In addition, we could plan for a railway fit for the future. A more efficient, well planned, publicly owned railway will help people leave cars and planes behind and help tackle the climate crisis.

No wonder 64% of us believe the railways should be in public ownership - including a majority of Conservative voters.

Get all of our utilities back in public ownership for

The short sightedness of hobbling British passengers, thereby stunting our economy, for the profit of a few is ridiculous. We need the high speed comprehensive public ownership rail systems other countries get to benefit from.

Everything here is true- all that is bad for railways takes place in the UK. The private companies want to fragment more by having distinct boundaries, not having to share tracks.We buy in foreign rolling stock, locomotives & these are maintained by numerous private firms. All are in it for the money, which is a guaranteed profit from the vile Government. No wonder foreign railways want to run British trains. Network rail is a shambles, a mishmash of inhouse & private companies not interested in timing work to suit the operator, they want to extract the maximum dividend. A shambles of private companies fighting for the biggest profits & to hell with the customer.