Tell us what you think 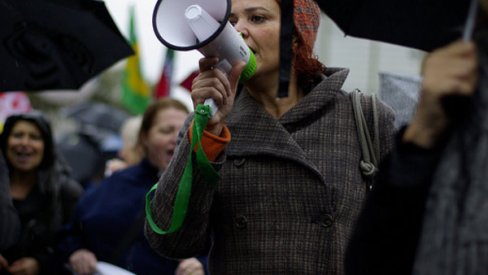 Why do you want to see public services run for people not profit? Tell us your story here.

We'll use your comments to help make the case for public ownership - look out for your thoughts on our homepage!

Thanks for telling us what you think.

Photo used under Creative Commons licensing, thanks to anw.fr.

It's great people like you exist! It's important to show there's an alternative to privatisation. We've been so brainwashed into thinking privatisation equated with efficiency and good management, but a fresh look at public ownership is now I feel what's needed. Public services should definitely be run for people, not for profit.

We need to give public ownership a strong new positive image, showing that these days things CAN be done better & more efficiently for the benefit of people. We must overcome the view that public ownership is an outdated, tried & failed, backwards step...

Here is a quote from my friend Dr. David Playfair who lives in Canada, regarding his post office:

"There are two reasons why I send paper packages. Firstly, it gives me an opportunity to chat to our village's lady postmaster about what the British post-office did when e-mails reduced the number of letters. Savings bank loans, driving licenses, passports etc etc. She sighs. 'If only our post office would do that - but then the commercial interests would oppose.' Maybe she'll pass the thought on to her Union . . ."

The Shareholders are the real winners in all the rail franchises as they will never lose. MPs and their friends are the shareholders and making a lovely risk free income. Yes, I would like to see the railways in public hands but not as it was in the old BR days. The local authorities should be running the rail companies in their areas

Although only aged 5 and 6 I never have forgotten parents and neighbours in discussing each case were appalled that their spouses had not said anything. Had they done whiprounds would have been held to raise money for treatment.

The profit before treatment of privatization could, probably would bring back death through poverty.

I'm 67, much the same age as the NHS. Since I left school in the mid 60's, I've seen governments of every stripe (and demonstrated against most of them! ) We thought Thatcher was bad but compared to this lot, I'm not so sure now.

I've witnessed privatisation of public services since it all began in the 1980s with BT, water, energy and bus deregulation. It didn't make sense then and it still doesn't now: service has declined, particularly for the less wealthy; pay and conditions for workers have deteriorated; and valuable public assets have been handed over on the cheap to private individuals, companies and outsourcing agencies whose values do not correspond with those needed to successfully provide all of society's members with the services they need. Short-term financial gain cannot and does not sustain long-term service provision, organisation and development. The current government is fundamentally opposed to state provision of public services, putting the NHS in grave danger, so this makes the work of "We Own It" absolutely vital.

We can't get to a local village market which is about 3 miles away.

We can't get to the doctor's surgery in the next village and that is about 1 & 1/2 miles away.

We can't get to a Post Office because that's in the next village about 1 & 1/2 miles away.

Our village shops are :-

Forgive me for not getting too excited about bans on new bus companies.

In Sheffield, the council has contracted Amey to chop down a huge number of trees. The reasons for almost all the "killings" just don't stand up in any way......bumpy pavements (it's actually companies like Amey & utilities that dig holes and poorly repair afterwards that cause most problems), can't afford to look after the trees (but can afford huge teams to chop them down!) etc etc. Sheffield was one of greenest cities in Europe, trees save us from effects of pollution etc but one small area of Sheffield lost 160 trees.....ONE HUNDRED & SIXTY! Read it and weep because they're just keeping on doing it and we can't stop them. THEY ARE OUR TREES.

This was what I put in my survey & I was heartened to receive an email from Weownit commenting on the matter. We have STAG in Sheffield....a group who are trying to stop this senseless destruction but people are getting arrested for peacefully protesting. It's all just WRONG.

Non-profit-driven services mean that quality products and delivery are the no.1 priority. This equates to services for the public and not for greedy CEOs and shareholders.

Privatisation not only takes profits from public services, so away from the public purse, but when it performs badly who picks up the tab? The public!

Privatisation is morally dubious for many essential services. As soon as profit is prioritised over people in (for example) healthcare and education, we see a race to the bottom; competing companies drive costs down in the name of efficiency, and all they ultimately concern themselves with is the bottom line. The provision of the service becomes the by-product, and if it works for the people then that's because of a happy coincidence rather than it being a primary objective.

Public services help everyone - not just the well-off.

I don't believe that anyone pays taxes wanting some of that money to go into the pockets of shareholders in the private sector. Efficiency is good, but privatisation is not the only way for an enterprise to be run efficiently.

Public services are meant to ensure that every one has a roof over their head, food to sustain them, and access to medical services for a life that has quality and hope. To put a price on that and moreover to expect to profit is to demean humanity.

I feel very strongly that public services MUST remain public & not be sold off to the private sector.

Fares on privatised bus companies continue to soar to increase profits. They should be treated as part of the national infrastructure and be a public service.

I value We Own It for supporting action.

I just think making money out of public services, particularly health, is wrong, unjust and inhumane.

I believe public services should be for the public good and any profit or loss should go to the government.

I believe public services should be for the public good and any profit or loss should go to the government.

It is driven by ideology not economics.

I hate the way private companies put profit first. I believe that public ownership means that public needs are the most important consideration.

I think this country should be back in the hands of the people, not profiteers.

You're all doing a grand job ... onwards and upwards

With Privatisation prices go through the roof and services becomes shoddy and non-existent. Just look at the trains, buses, NHS, post office and energy suppliers.

We are increasingly being governed by companies, not elected governments. This is a denial of democracy.

With the signing and imminent ratification of CETA, the Comprehensive Trade and Economic Agreement, between the EU and Canada, privatisation will become more widespread and taking anything back into public ownership will be breaking the deal. Not enough people are aware of the storm brewing with CETA. We need thousands of people to contact their MEPs across the country and demand they vote no when it comes before the European Parliament on Valentine's Day 2017. Maybe your supporters could make a huge difference in this vote.

It will be a long, hard struggle to reverse the damage already done, but it will be worth it. Thank you for running this campaign, it is sorely needed.

Thanks. Keep up the good work!

I've been corresponding with the CEO of our local bus company for over a year to try to get a more sensible service for my daughter from school. It's really made me think about who privatised services are really for, and has made me absolutely passionate about stopping the government from banning councils from setting up their own companies.

I'm also really worried about how the NHS is being dismantled and privatised bit by bit through the back door. I work for a company that uses Sodexo for catering and cleaning, which I know also supplies the same services to hospitals. I can tell you from experience that their services aren't cheap, and I can't believe it is more economical to outsource such services in hospitals to companies who are operating for a profit. This, of course, is the tip of the iceberg in the NHS!

Just keep up the good work.

I just feel that things that people need - from transport to care services and everything in-between - should be owned by the people and run for the people.

I have seen both private and public bodies running eg: British rail. There were problems but it was run for the people and any profits either put back or used by the government. The privatization of OUR NHS is being done with the utmost stealth by underfunding to make an excuse for privatization. All this has to stop!

For me it is a moral issue. ALL utilities should be run for the benefit of all the people in the country.

We need these services and therefore we must own them!

Public services can and should be run at a fair profit, not at a loss, but that profit should be ploughed back into improving the service, not to line shareholders pockets.

I resent the fact that people make money out of providing for our basic needs and those needs of our society.

I am so grateful for the stand you have been making as so many of the areas under threat are already marginalised in the minds of the policy makers. Trees, parks and open spaces only have our voices to speak out. Public transport is sometimes the only choice for those with limited incomes and so slips off the radar. And as for Land Registry/Ordinance Survey etc...!!! But together we can be powerful in defending things that should mark our country as a decent civilised place that values these quiet but valuable assets. Rock on We Own It!!!

Keep up the good work.

I think that private companies are businesses and not natural service providers. It is in their interests to put their profits and shareholders first which therefore means their customers do not come first.

I feel very strongly that anything society believes essential, should be run on a not-for-profit basis & as a service.

I don't want to go back to a time when we have to pay to visit Hyde Park and it's wrong to make prisons or social care services a business. Keep up your great work and thank you for doing it.

A public service should be exactly that. Any profits should be put back into the community to improve facilities.

The companies or organisations who take over public services are in it to make a profit, lets make no mistake about it, and this is wrong and creates more problems than it solves.

Privatisation of public services has just meant profit for a few and bad services for the public.