The battle for better buses is turning the tide on privatisation. 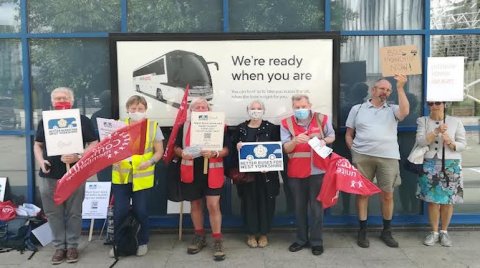 Matthew Topham, We Own It campaigner for Better Buses, on the next steps for public control of our transport.

In March this year, Greater Manchester’s Mayor, Andy Burnham, announced that the region’s bus network would be coming back into public control. Not only did this make the region the first to end Thatcher’s terrible experiment in bus deregulation, but it has also set a precedent for reversing privatisation in other public services too.

For nearly 40 years, deregulation has allowed private bus operators to control local transport networks, setting fares, routes, and standards to suit their interests, not the needs of local people. As a result, bus fares have doubled in real terms and countless routes have been lost to maximise profit.

Public control allows local politicians to take control of the network, ensuring that it works for its drivers and passengers. They also gain access to the fares generated on our buses, meaning they can block bus operators running services as cash cows for their shareholders. It's a big step in the right direction, towards the high quality, democratically run and publicly owned services we all need.

And this win was people-powered! Manchester’s victory for people over profit didn’t simply happen overnight. It took the energy and drive of hundreds of people who care about better buses to make public control the only acceptable option. The Better Buses campaign pulled together a wide coalition, including everyone from trade unions to religious groups, so that wherever the region’s leaders looked they saw the call for better buses, run by and for their communities.

Greater Manchester isn’t the only place where people have had enough of buses run simply for profit.

Now we have Manchester as a precedent, showing us a way forward. But people are still suffering under privatisation across the country, and it's time for change.

Let’s take one example. In their hunt for profit, bus operators choose to offer a confusing range of tickets as they try to pilfer passengers from their competitors. The results are disastrous for working people. On just one transport corridor in Leeds, there are over 100 different ticketing options and last year bus drivers for one company in Sheffield were handed a 30-page booklet explaining the confusing range of tickets they had to sell.

No wonder bus journeys are down 60% in Yorkshire since the private companies were put in the driving seat!

Next stop for Better Buses? Yorkshire!

Starting in 2019, Yorkshire’s unions have started to make the case for the region’s Mayors to follow in Greater Manchester’s footsteps.

I joined their efforts in February this year. Our priority was to make public control a top issue in the inaugural race for West Yorkshire Mayor. If even Robert Peston could see that Tracy Brabin’s win was due to her policy on buses, I think we succeeded.

But we have to overcome some bumps in the road. While the new Mayor, Tracy Brabin, kept her election promise and started the public control process in her first 100 days, she also put it at risk by agreeing to trial an “enhanced partnership” with bus operators in the meantime.

Partnerships are just more of the same. The likes of First and Stagecoach still have the final say over the fares, routes, and standards, while local politicians try to encourage them to meet people’s needs by providing infrastructure investment to boost their profits.

Going into partnership with the bus companies not only delays the mayor’s pledge to investigate public control (adding over 6 months to the process), but it also puts it at risk.

While researchers have shown that introducing a shareholder-first mentality into a bus network is incompatible with delivering a decent service, any short-term improvements will be claimed as a reason to extend the arrangement by operators, propping up their profits in the process. So we'll be pushing back against these partnerships every step of the way.

Amping up the fight in the year ahead.

Thanks to donations from hundreds of supporters who believe in better buses for all, I have been able to extend my time supporting amazing activists in West Yorkshire.

Over the next year we will push West Yorkshire’s politicians to abandon their commitment to partnerships, focusing on public control instead. We’ll make our voices heard across the region, in letters to the press, through social media, and even outside their seats of power. We will also build up our coalition, reaching out to more local groups so that our demands have support from across the community.

The incredible number of ordinary people giving individual donations to grow the campaign has also allowed us to expand Better Buses to South Yorkshire. The region’s leader, Dan Jarvis, was elected on a manifesto pledging to “use regulatory powers, and eventually franchising [public control], to improve bus services.”

While the Mayor produced a review of bus services last year, recommending that “investigation of franchising in South Yorkshire begin immediately,” he recently opted to go into partnership with the region’s bus companies with just vague promises that public control “remained on the table.”

The climate crisis means we can’t afford for Mayors to rest on their laurels. That’s why I will support the existing coalition in South Yorkshire to build pressure on their local leaders to start the process, exposing their inaction with stunts outside their offices.

We will also build the case for public control with the wider public, through conversations on South Yorkshire’s streets and videos of local MPs explaining why better buses will only come when we bring the private companies to heel. In West Yorkshire, we won over 4 of the candidates for Mayor by confronting them with the experiences of local bus users. With the election for South Yorkshire Mayor next year, we will use this tactic once again to shape the conversation.

What does this mean for everyone across the UK?

Whenever a new area brings its buses into public control, not only does it smooth the path for other regions, but it also helps push back against the prevailing “market knows best” mindset.

After all, why would we hand the NHS over to corporations when countless areas across the country are reversing the disastrous experiment in bus privatisation?

Buses are the glue that holds many communities together, allowing people to access work, education, and culture. They’re even essential in accessing other public services.

Where better to start the fight back?

People before profit for all public services makes perfect sense.

If we are to provide good versatile bus services they must reach everyone and that means bus services that serve rural as well as urban areas, highly populated as well as low levels of population we must put public service before profit. We have a climate change emergency and therefore need to persuade more people out of their cars and on to public transport and that means public services before profit.

I would like to wish you well with your campaign. A public service is meant to serve the public.

I would like to wish you well with your campaign. A public service is meant to serve the public.