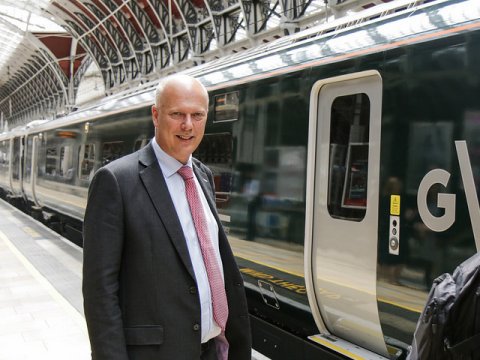 Remember the train timetable chaos in May? The Office of Rail and Road has now explained what happened - 'no one took charge'.
If you look for clear lines of accountability in our privatised, fragmented railway, you'll find Chris Grayling, the Transport Secretary, playing the blame game and saying 'I don't run the railways'.
Mr Grayling, speaking to BBC Radio 4’s Today programme said 'It’s a system problem, it’s the way the whole industry works'. He says he wants a rail industry which is ‘more passenger focused’, and that the current system is not ‘fit to meet today’s challenges’.
And so today the Department for Transport announced the most significant review into the rail industry since privatisation in 1997.
But will they consider public ownership? Apparently not.
The Financial Times has reported sources close to Grayling believe ‘the point of this exercise (is)..all about getting private companies to deliver a better deal’ and that before the review has even begun, Grayling believes it will not recommend public ownership.
'The reality is it is not about ownership, it's about the pressure on the system' he says.
Are you serious, Mr Grayling?
It's outrageous that from the off, Chris Grayling is already ruling out public ownership.
Private companies have been given chance after chance to deliver better services and the reality is simple: they aren’t doing it.
Train punctuality is at its lowest in 12 years. Chaos, crises and failures on the railways now regularly feature in the daily news headlines. And we, the passengers, are paying the price. It’s just not fair. And everyone is passing the buck.
Public ownership would be much more accountable and efficient, saving us £1 billion a year to invest in better services.
Grayling's review acknowledges that the rail system is failing to meet the needs of its passengers - that's us, the public. But so far, it isn’t even open to public consultation - perhaps this isn't surprising, given that 76% of us support public ownership!

“With trust in the industry at an all-time low, it is vital that the outcome of any inquiry or review reflects the needs and experiences of passengers." Peter Vicary-Smith, Chief Executive of Which?

If something doesn’t change, this major review is going to be a total waste of public money.
As Andy McDonald says, we ‘don’t need another review from the Tories to tell them that rail is broken’.
As Caroline Lucas says, we need to ‘give rail workers and passengers a say on how services are run.’
The reality is this is all about ownership and accountability. And we won't get either until  we run our railway for people not profit.

There are two models of public ownership that I have in mind:

1. The Deutsche Bahn model, of one company in charge of the whole railway system, with the government as the largest shareholder, or

2. A state holding company (British Railways, please - not British Rail - I'm fed up with sloppy thinking!), owning 4 or 5 companies based on the "big 4" companies that ran the system pre-1948. The system to have uniform ticketing with German style "Bahncards", and national standards of training and staff involvement in the running of the railway.

Both of these solutions would avoid the present shambles of today's fissiparious network, bringing larger, more efficient and responsive business models.

This is hardly going to be an impartial review with an option ruled out before the review begins . Another waste of tax payers money yet more proof that Grayling is incompetent !

Only problem with re-nationalisation is its political advocates are too far removed from the reality of what the general public want and believe they know best. As such they also subscribe to a meritocracy (albeit under the influence of champagne socialism) hence dismiss the pragmatism, sensibility and fairness that civilized society requires.

The current Brexit fiasco proves this beyond any doubt i.e. they wont let go the helm even though they only have a fingertip on the rudder - and the public are held up screaming to be cut loose.

Thus the real issue is how we, the Public, can get control of our railways and other necessary and strategic public utilities i.e. NHS Water Energy, etc. and steer the country in the right direction.