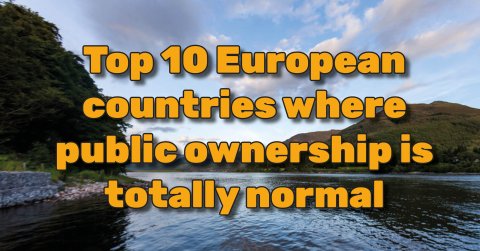 Scottish Water was never privatised, it’s publicly owned and is the most trusted utility in the UK, delivering cleaner rivers, lower bills and more investment per head.

Mail, rail, buses and water are all publicly owned in the republic of Ireland.

The railway in Switzerland is publicly owned - and it’s been named the best train company in Europe.

Denmark has the highest proportion of wind power in the world. Its transmission grid (like our National Grid) is fully publicly owned and most wind farms are cooperatively or community owned.

In the Netherlands, water, electricity and gas networks are all publicly owned - and it's ILLEGAL to privatise any of them!

The city of Munich in Germany is developing 100% municipal and 100% renewable energy by 2025 - they got tired of waiting for the private providers so they’re doing it directly.

In Germany too, 88% of all trips on local public transport (bus, tram and local trains) are provided by publicly-owned operators.

Water is also publicly owned in hundreds of French cities! One of these is Paris, where L’Eau de Paris (the publicly owned company) has cut bills and introduced still and sparkling water fountains throughout the city #socialismwithasparkle

It is right wing ideology that wants us to lower our standards to the American standards as opposed to the much higher standards of Europe.

Somebody talking sense at last, well said pall. This country is in such a mess as the tories stumble from one chaotic mess to another and thrash around trying to blame anybody or anything but themselves. And the politically eliteret working class tories are conned again by Bojo the clown

Good, informative and useful information. The problem is that our electorate do not get much coverage of this information in the main media outlets.

We should make it illegal to privatise utility services and other essential services as is the case in the top 10 countries. What's stopping this from being implemented?

Absolutely - I agree but only Jeremy Corbyn would see that through & I doubt the populace having been fed hate bile in MSM will do that in Thursday's election. I blame the dim voters who fall for all the lies flying about.

Given the disastrous consequences of many of our privatised sectors (rail, social care, parole, etc) we absolutely need to take them back into public ownership and given that the majority of the population agree that some of these areas should be returned to public control it would seem the democratic thing to do. A large and important part of our economy should clearly remain in the private market sector - i.e. where the advantages of market competition, innovation and profit reflect consumers fluctuating demands and needs but where security, equal opportunities and infrastructural provisions this is not always the case. A thriving economy which delivers a reasonable level of well being for all demands a mixed economy where the state regulates where necessary and steps in to provide essential services where private semi monopolies fail to deliver and where the economy is in need of investment where private enterprise has not delivered.

Wish it would come quicker !!!!

For the people not profit

Public utilities should be kept public. We do not have a choice in whether or not to use water or power. Most of the profits from all the privatised utilities go overseas.

Privatisation of utilities is corrupt