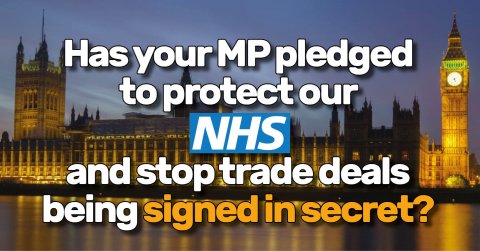 In July last year, MPs voted against amendments to the Trade Bill that would have protected our NHS and ensured that trade deals can't be signed in secret. Not a single Conservative MP voted to protect the NHS, and just 12 voted to allow parliamentary scrutiny of trade deals.

It was a shocking move that means our NHS is still very much on the table in trade deals with the USA and with other countries.

In December, the House of Lords amended the Bill to put those protections back into the Bill. This was a massive victory won by the more than 300,000 people who signed the petition to protect the NHS.

Now, the Trade Bill is returning to the House of Commons. It is absolutely crucial that MPs redeem themselves, amend the Bill and protect our NHS. That's why we're asking MPs to pledge to do just that.

So far just 35 MPs have made the pledge. That means that nearly nineteen out of every twenty MPs have not signed the pledge.

Find out if your MP has made the pledge

To make sure our NHS is protected, we need as many MPs as possible to make this pledge.

In order to make that happen, MPs have to hear from their constituents why the NHS is so important, and why we won't let it be carved up and sold off in a trade deal with the USA or anywhere else.

This could well be our last chance to get these protections written into law. If you haven't already, please contact your MP and ask them to amend the Trade Bill now.

And if your MP hasn't yet signed, make sure the public know about it. Help spread the word by sharing the list of MPs who have made the pledge on social media.

The NHS and our water service should always remain in th3 ownership of the people. Water is a natural resource and all humanity needs it. Now it is privatised there is lots of wastage and more pollution.

The NHS was paid for by every working class man and woman with taxes and National Insurance contributions and it was helped to set up by a socialist government.

This Capitalist Right Wing Conservative Government wants to sell it off to America. This means poor people will not be able to afford surgery and medical treatment.

This Government does not care if ordipeople suffer or die early as long as they make money.

Why are there more SNP signatures than Labour? It doesn't make sense.

Our NHS is our most vital and most cherished public service. Tories in the UK & elsewhere won't be happy until they have privatisatsed it to get their hands on some of the $55tn world health market.