Local pressure gets victory against Centene 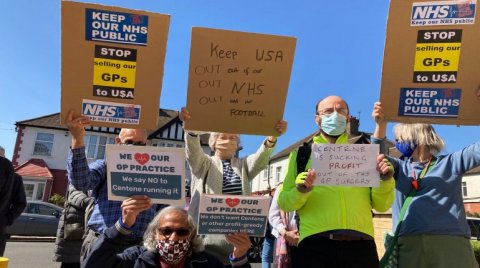 Since February this year, We Own It, Keep Our NHS Public, local campaigning groups and many of YOU have campaigned to get Centene, an American multinational corporation, kicked out of the 49 GP practices they recently took over in London.

And we’ve been making headway.

In April this year, together with  Hammersmith and Fulham Save Our NHS (HAFSON), we managed to get the contract for a GP surgery in Hammersmith cut from 5 years to 2 years, with additional strict conditions for evaluating their performance.

And just yesterday, Monday 16th August, We Own It was informed by North Central London CCG that they were renewing Centene’s contract to run two Islington practices for JUST one year, instead of the usual five years.

This was after local pressure from We Own it and Islington Keep Our NHS Public as well as local councillors Anjna Khurana and Claire Jeapes. The two Islington MPs, Jeremy Corbyn and Emily Thornberry, also supported their constituents to oppose Centene’s presence in their communities.

Local, collective pressure works. And we will continue to pile on the pressure wherever Centene is involved.

And Centene’s track record is nothing to write home about. Here’s a sample of what they’ve been up to over the last few years here in England:

The latest Centene disaster came on June 25th this year when government inspectors released a report that found that 3 Centene-run surgeries have been rated “Inadequate”, after being rated “Good” under the local GPs who previously ran them.

It seems clear that Centene’s involvement was a factor in the deterioration of the quality of services local people around the practices were getting.

The report on the three surgeries said that none of them could “demonstrate that clinical and non-clinical staff had the skills, knowledge and experience to carry out their roles”. It also found that “leaders could not demonstrate that they had the capacity and skills to deliver high-quality sustainable care.”

The three practices were found to be inadequate in terms of safety, effectiveness, responsiveness and being well-led. They failed their duty of care.

This is why Centene must not be allowed to run our local GP surgeries. Their track record shows that they are much more interested in extracting profit than they are in the health and wellbeing of our communities.

Our NHS was created to provide high-quality care at the point of need, for people, not for profit. The pursuit of profits should not be allowed to water down that service and put communities at risk.

We must keep up the fight. As this victory shows, we can win.

Great care needs to taken now. Centene will undoubtedly pull out all the stops and may well loose money for a year or so to gain favour in this country. After that………?

The less we have to do with any American businesses the better.

What was the factor that enabled that outfit to take over GP practices at all?

APMS (Alternative Provider Medical Services) contracts, which allow companies that are not run by medical professionals to run GP practices is what allowed it to happen. They did not exist until 2004. They should be outlawed.

If we want to outlaw such non-governed tax avoiding Corporates, SERCO included, we the People have to reclaim Sovereignty from the so-called Government who stole it in 2008, who are supposed to be working for us. See "British Constitution Group", & commonlawcourt.com. The Supreme Court prorogation of Parliament sets the precedent. I feel that Lady Hale is up for it.

I object strongly to profit hungry, privatisation takeover of OUR NHS or any other public services. I work in the public sector as a mental health Social Worker and absolutely object to any privatisation.

Yes - It is a fact that many people in the USA find Medical Care Insurance for too costly and so do not have it. In the end they go without and the consequences - i.e. they go untreated with serious curtailment of their natural life spans.

If this company is gaining/purchasing contracts to run GP and other health services, should we not be looking at who is taking their money and the principles involved in such procedures within the UK? Yes, I am quite ignorant about this process but I believe 100% in the NHS staying publicly owned and run. Just would like to understand how it works.

If you have any doubts about American Healthcare just visit the subject on YouTube. You will be shocked..

Centene is only interested in milking the NHS for as much as it can get. Whether because of this some patients may die means nothing to them.

Kick them out of every nook and cranny before their roots become too deep for this to be possible.

I have lived in a country with private healthcare. I knew people who could not afford medicine or GP visits, as insurance never fully covered the cost. People have paid for NHS since its conception its ours and not for sale!

It is a crime to let American Healthcare companies to run our Gp surgeries. They will just destroy it in process..I remember only a few yeas ago , that we phoned/ or dropped in the surgery and could see the doctor.. now it takes at least a week for more urgent cases. Or at least two weeks .. this was unheard of. We should resist the take over at any turn . Keep their greedy squalid fingers out of our beloved NHS .

Private companies, American or otherwise, will not be interested in anything here except for profit. Its what the do. The NHS is the best thing that we have acheieved/created in this country, and we really need to pull out everything to protect and strengthen it, our greatest asset.Keep them out.

Well done to the campaigners. The public are generally unaware of the corporate takeover of our NHS. The more we can do to raise awareness the better. Sadly we have an ineffective opposition and a government where their mates can help themselves to our precious public services. We have no alternative but to fight, long and loudly.

Thanks so much for getting in touch with this question - you can find a lost of the surgeries taken over by Centene here: https://weownit.org.uk/blog/here-are-gp-practices-taken-over-us-health-insurance-giant-centene