An open letter to Sir Keir Starmer on public ownership 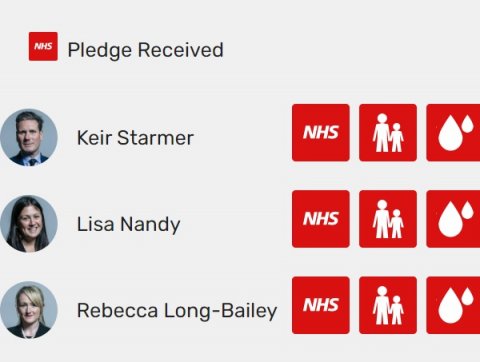 In 2020 we asked all of the Labour leadership and deputy leadership candidates to sign the 10 We Own It pledges on public ownership. We were very happy that you signed up to those pledges.

In 2020 you also made your own pledge for ‘common ownership’ in which you said ‘Public services should be in public hands, not making profits for shareholders. Support common ownership of rail, mail, energy and water; end outsourcing in our NHS, local government and justice system.’ We were very happy to see that too.

In your recent pamphlet for the Fabians, ‘The Road Ahead’, public or common ownership is not mentioned. We’re writing to ask for clarification on why this is the case, and to offer five reasons why public ownership of public services must continue to be a core policy for the Labour Party.

In your pamphlet, you talk with conviction about the values that, for us, sit behind strong public services working for people not profit. It is encouraging to see you recognise that ‘The plan to strip back the state has come at immense cost to the social fabric of our neighbourhoods, our communities and our country.’ And to read that ‘Where Tory individualism decrees there is ‘no such thing as society’, we believe the opposite.’

Labour’s public ownership policies are an opportunity to prove what those values mean in practice, and we know that these policies resonate with people.

In your Fabians pamphlet you talk about how in government ‘A failure to actively shape and strengthen the economy means that vast potential is being wasted.’ You explain that ‘a Labour government would provide a level playing field, a skilled workforce and a modern infrastructure, from transport to public services.’ Public ownership can help to achieve these goals.

You highlight particular areas where Labour would take bold action.

In your new ten principles you say ‘The economy should work for citizens and communities. It is not good enough to just surrender to market forces.’ You also ask in your pamphlet ‘Why when government departments are funded by taxpayer money are we so lax about ensuring that money is spent appropriately?’

For nearly forty years now, an ideological commitment to privatisation and outsourcing wherever possible has meant that the public is getting a bad deal.

Privatisation costs more because it means spending money on shareholder dividends and the higher cost of borrowing in the private sector (the government can borrow more cheaply). Creating artificial markets where they don’t belong also often creates wasteful fragmentation and duplication.

Where public ownership involves buying back assets, this does have a cost, but it pays for itself over a relatively short timeframe because we are acquiring assets and we stop wasting money on the costs mentioned above.

Where public ownership involves taking contracts in house as they come up for renewal, there does not need to be a cost.

In both cases, we the public save money and this is a sensible decision from a financial point of view.

We're wasting £13 billion on privatisation every year. That's £250 million every single week. These are statistics that Labour should be talking about.

In your pamphlet you say ‘Labour in government would show that we take seriously people’s demands for more control. We will deliver social justice, stronger communities and unlock potential by unlocking power, wealth and opportunity across the United Kingdom. But we will not do that by decree – we will put power and control in the hands of the people, whether at work, in accessing public services, or over the decisions that affect their lives. Where the current Tory government has muddied the waters of transparency on the money it spends or the things it does, I want to make it easier to hold government to account.’

You also say ‘One of my burning desires is to rethink and improve our public services.’

All of this is brilliant to hear. In 2019, we responded to Labour’s consultation on democratic public ownership with a report ‘When We Own It: A model for public ownership in the 21st century’. In this report we looked at how we could make sure public ownership was efficient, effective, accountable, caring, green, innovative - and so successful that it couldn’t be dismantled in the future. We looked at governance structures that would give a voice to the people who use public services, workers, communities and civil society alongside democratically elected politicians. We looked at new public duties for the 21st century. You might find this report useful. Here is the 2 page summary and here is the full report.

There are numerous examples of successful public ownership, in the UK, in Europe and around the world. Examples in the UK include, of course, the NHS (although it’s being privatised) but also Scottish Water, Reading Buses, Channel 4, Ordnance Survey, the Land Registry, the Met Office, the Royal Mint - and those railway lines that have been taken back into public ownership after failing in private hands. Most of these institutions turn a profit every year that gets reinvested back into better services.

Across Europe there are many examples showing how public ownership is the norm, from water in France, to energy in Germany, to the railway in Switzerland. In fact, the Transnational Institute shows that around the world, cities and communities are taking back control over public services.

We are arguing here for a mixed economy rather than the ideological extremism that insists the private sector must do everything. The majority of people in the UK don’t support this ideology; they believe in public services for people not profit and are frustrated by high rail fares and energy bills, cuts to bus services, polluted rivers - because these problems have a real impact on their everyday lives. Privatisation has failed to live up to its promises of lower prices and better services. Public services tend to be natural monopolies where there isn’t much of a consumer market. The private sector is good at many things - running public services isn’t one of those things.

I hope you will find these arguments useful and would love the opportunity to discuss them with you.

Director - We Own It

Totally agree that facilities should have never been privatised in the first place. Always someone looking to make an easy profit. Pity we have bred a population that only thinks this way. Being optimistic I really hope we can reverse this trend and make public amenities and the NHS publicity owned once again. The public pay for it so it should remain public and not for profit. Proof is in what is happening with everything and why everything on its knees.

Starmer needs to keep to his Leadership Pledge #5: Common Ownership https://keirstarmer.com/plans/10-pledges/ I'm comfortable with him reaching out to business, especially sustainable ones, as that's where the new jobs and wealth will be created, but a mixed economy with a foundation of publicly owned monopolies like rail, water, health, power supply, etc. creates the more stable long term infrastructure that business yearns for. Public servants also get better wages, decent working conditions and proper pensions than privatised employees tend to, as investor and CEO profits are often created by exploiting the workers and skimping on investment.

Having worked in public services I hope Labour leadership can demonstrate the leadership required . We will not get it from the Tory's who lie as soon as they speak.

Totally support and endorse the open letter to Kier Starmer. We must turn the tide before it's too late!

If the labour party don't act there will be no NHS

Citizens striving for pubic ownership will have a cohesive aim, so much needed after the divisive measures we have been suffering for so long. The

percentages speak for themselves. It would be good to be able to be glad to be British again instead of feeling ashamed.

MY HUSBAND AND I LEFT THE LABOUR PARTY WHEN KEIR STARMER BECAME LEADER AS WE WANTED EVERYTHING ABOVE NATIONALISED BUT THIS MORNING HE HAS ALREADY CHANGED ON HIS PLEDGE BUT THAT IS NO SURPRISE TO US AS HE SHOULD HAVE BEEN A TORY..

The conservatives have sold our country, it's services manufacturing and so much more off. Please keep key areas on our country's agenda. Our infrastructure is failing.

This country is going from crisis to crisis. We all know that our National Health Service on which we all depend is absolutely on it's knees and whilst I appreciate that it would not be possible to return all our public services back into public ownership in the immediate future it is absolutely vital that the NHS is saved from any further sell-offs. The unbelievable waste of public money throughout the Covid crisis by private companies is criminal and I urge Keir Starmer to start speaking out for the people who voted for him in the belief that they would champion their cause, and get off the fence and DO SOMETHING.

It would be an Idea, when these Utilities have been nationalised that it needs making so that the Tories cannot sell them of again like they always have done every time they got back into office, they sell them to boost their coffers, and as with selling of the housing stock under Margaret Thatcher, the councils were told that they could not use the money to build any more houses which was just rubbish that is just what it should have been spent on.

Nationalisation is definitely the route for turning the tide for the Party and the country. It makes so much sense.

Should have been done years ago before capitalism had the chance to do the damage they have already done.

And it is a conservative government that has renationalised 3 Rail lines LNER. southeastern and northern I don't trust the Tories or Labour parties I am a member of the Social Democratic party

The ills of for profit organisations, like Serco and Virgin Health, taking tax money to run what should be publicly run services is evident all around us

Had Keir Starmer replied to your letter ye?