Here's how to actually clean up our rivers and seas 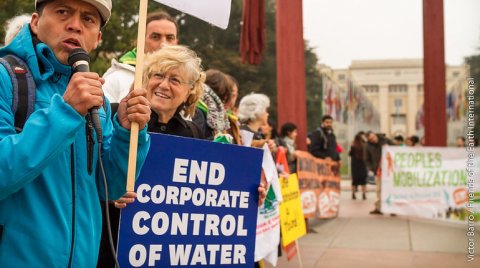 This year, the appalling scale at which water companies are dumping raw sewage into our waterways came to light. Following these revelations, it's clear that we need a thorough public inquiry into the disgraceful performance of the privatised water and sewage system in England and Wales.

The Environment Agency (EA) and OFWAT have just launched an investigation into sewage treatment works after water companies admitted to illegally releasing untreated sewage into rivers. But this doesn't go nearly far enough. These agencies have been part of the problem for decades, lacking the resources and will to regulate. Their investigation will be as useless as Yorkshire CCC claiming to have created an 'independent' inquiry into their own racism.

So what needs to happen?

Rebecca Pow, Minister for Nature Recovery and the Domestic Environment, should take responsibility for finding and appointing a panel which represents the public interest, with no relation to the private interests of the companies, and without connections to the failed regulators.

It should sit and hold hearings in every region of the England and Wales. The inquiry should create a proper public debate, with meetings and hearings live on the internet and all documents open to public scrutiny.

It should call witnesses:

The inquiry should be given terms of reference with a wide freedom to examine and recommend alternative possible policies.

Without this range of voices around the table, we will just end up with toothless conclusions that let private companies continue to get away with it for decades to come. We cannot go on with our communities cut out of the picture when considering the future of our local environments, our bills, our essential everyday water supply.

It's time to stop private companies and regulators taking us for a ride.

The majority of the public want water in public ownership. Why?

If water belonged to all of us, money would stop leaking out of the system and into paying whopping dividends to shareholders. Instead, funds would be re-invested in upgrading infrastructure to protect our waterways from pollution.

In Scotland, water is already in public ownership. Scottish Water delivers water and wastewater services for the whole of the country. It is run as a commercial company without government funding, but all profit is invested in better services. Bills are lower than in England and Scottish rivers and lakes are far cleaner. If the English companies had invested at the rate Scottish Water can because it is publicly owned, £28 billion more could have gone into the infrastructure that prevents sewage pollution.

If we're serious about cleaning up the mess that water companies have been spewing out at our expense, we need to go further than a slap on the wrist. We need to take our water into public hands. And a truly public inquiry is the first step.

It is clear that water management is not a suitable activity for private enterprise. The market is a good tool for fast-changing and evolving services, but not for ones which demand steady monitoring, solicited and unsolicited investigations, large-scale investment and maintenance, and can cause slowly developing damage.

The failures have been known for many years. Accountability has been non-existent. Government has been lax, if not compliant in this disaster.

Time for all utilities to be nationalised.

It is clear from the Scottish experience that utilities such as water should be in public hands. The conflict between investig in cleaner water, repairing pipes/leaks, developing new plant to stop sewerage overspill is in direct conflict with providing shareholders with dividends.