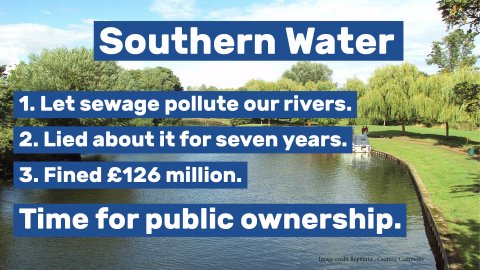 Private water company Southern Water has been forced to pay a whopping £126 million for allowing sewage to pollute the environment and covering it up for seven years. This is a massive scandal - so big that the Environment Agency has launched a criminal investigation into the case.

All the while, water company CEOs have pocketed £70 million just six years, and shareholders have taken billions to their banks.

All of this shows us that the private water companies can't be trusted to respect the environment. They've shown time and time again that water privatisation is a disaster, both for people and the planet.

We need to bring our water into public ownership, and here's five ways you can help:

1. Ask your MP to support public ownership of water

So far, 48 MPs have backed our Early Day Motion calling for publicly owned water. We need more politicians to take leadership and stand up for public ownership.

Write to your MP and ask them to sign the Early Day Motion!

2. Join an action outside a water company HQ

This year is the thirtieth anniversary of water privatisation. To mark this, we're coordinating actions outside water company HQs across England. We'll be giving them their notice that it won't be long before we take them into public ownership, and spreading the word about why privatisation can't continue across the media.

Give your local water company their notice

Over 20,000 people have already signed the petition calling for water to be brought into public ownership. This is a huge show of strength! But we need more people to add their names to really make an impact. After thirty years of privatisation, people have had enough!

Add your voice - support the call for public ownership

Public ownership of water is hugely popular. 83% of people support it. Help to spread the word about this, and why so many people are on board.

5. Donate to build the campaign for publicly owned water

As well as taking action for public ownership, you make sure it happens by funding the campaign. A small donation would go a long way in funding more actions, more videos, and more media coverage.

Water is a human necessity and so access to sufficient good clean water should be a human right. I have supported Water Aid for years in its overseas work. Now we need to bring public service values back to the water industry in the country.

ALL services / utilities should be taken back into public ownership!

Someone of my age is all too aware of the losses we have experienced since the Thatcher era. I still have Utility bills from the 1970,s which show the astonishing diffrence in charges since our services were all publicly owned. It borders on criminal that so much that is essential is now profit driven.