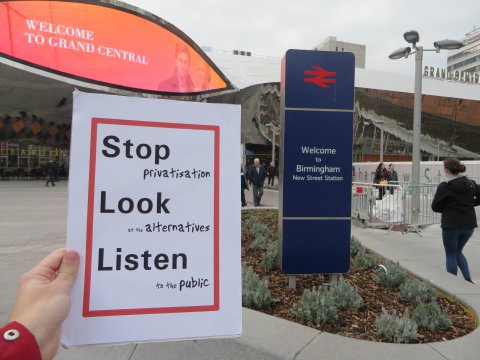 As Network Rail releases its accounts for the last year, our new report - covered in the Mirror today - warns against sell-off plans that would lose the company more than £10 billion over ten years.

Government plans to work with Network Rail to sell off stations, power and telecommunications assets, and the company is looking at options for getting train companies to take over railway tracks in a move that would break up the unified network.

Our new report ‘Privatising Network Rail: a £10 billion ticket to disaster’ is an analysis by Transport for Quality of Life of the cost of sell-off plans. The report estimates the costs of setting up agreements, transactions and fragmentation, lost income from the assets sold to the private sector, and failure and exit if things go wrong.

Privatisation would mean Network Rail would lose billions in ongoing revenue from stations, commercial property and renting out telecommunications capacity.

Cat Hobbs, director of We Own It said: “Train stations, property and assets are part of our railway and belong to all of us. If they are sold off we’ll all lose out on the income they bring in forever more. As passengers and taxpayers, we want Network Rail to give the red signal to these sell-off plans. They should be managing the railway for our benefit and reinvesting profits, not giving them away.”

Lynn Sloman, director at Transport for Quality of Life and author of the report said: “Selling off rail assets will lose us money and our report shows just how much. Plus, we can’t risk a Humpty Dumpty railway – if the privatisation plans go ahead it’ll be almost impossible to put the pieces back together again.”

Last month, the Office of Rail and Road questioned the policy of selling off commercial property that brings in income for the railway, saying they had not seen any ‘convincing reasons’ for the government’s approach.

The Shaw report commissioned by the government on the future of Network Rail was released in March 2016. It rejected the idea of full scale privatisation of Network Rail including the company itself but left on the table options for selling off assets.

Polling commissioned by us and carried out by Survation ahead of the Shaw report found that the public did not support privatisation of Network Rail itself. Even amongst Conservative voters, a majority of 51% wanted Network Rail to stay in public ownership while 37% wanted it to be privatised.

surely the assets should stay with company that earned them

Unclog drainpipes easily. Use a plunger and drain solution, as your clog might just be a construct-up of your hair and trash. If this type of doesn't function you might need to clear the drain using a snake. Supply the snake in to the drain series in terms of it would go. Transform the crank carefully, that will help to loosen the clog. Remove the snake, and run drinking water down the sink to find out if the block has been removed. You might want to use the snake a few times, prior to the block is cleared so don't give up!

Once you take your pet dog over a camping journey, be certain they have enough tick protection. Insects succeed in forests, and many flea treatments do not expand security to include ticks, so question your veterinary before departing in case your canine has almost everything he requires and what you ought to do for suitable tick reduction and removing.

Crisis-hit Northern Rail to be taken back into public ownership